A photo shared on Facebook by Anik Sutari, a doctor living in Serang, Banten, Indonesian, shows a scared little boy sitting on a roof to avoid getting circumcised.

The post has gone viral since Dr. Anik posted it on Monday, and garnered over 2,400 likes and over 1000 shares.

According to tradition, most Indonesian boys, especially Muslims, get circumcised around the age of five.

Dr. Anik said everybody tried to talk the boy down, but nobody dared to come up to the roof out of fear the child might run away and endanger his safety. After two hours of waiting, there were still no signs that the child wanted to go down, but suddenly his parents thought to call the boy’s teacher. Later, the boy’s teacher arrived on the scene and with a little persuasion, was finally able to talk to boy down. Read her post below.

“Throughout the history of my profession, 20 years of nyunat, and from thousands of children that I have been circumcision, just now his child ran away until he went up the roof
Everyone is trying to seduce, but no one dares to get rid of him because he is afraid of his child running and endangering his safety
After 2 hours waiting, but no sign of child want to go down, suddenly his parents remember someone, bu teacher……!!!
Yaaaaa……. it’s the guru……!!!!
It’s true….. as soon as the teacher comes, with a little persuasion finally the child wants to go down……
And the more magical…… the child walks himself towards the place of circumcision execution, directly positioning himself, without being led especially forced…….
Even until circumcision is done not thrashing / snapped, not crying and not complaining at all……
Praise be to Allah.
It’s only 10 minutes…….
But Nunggunya…… 3 hours…….!!!!
But it’s okay….. 3 hours is not a long time if it is compared to a very valuable lesson that I get from a great one…….. the teacher” 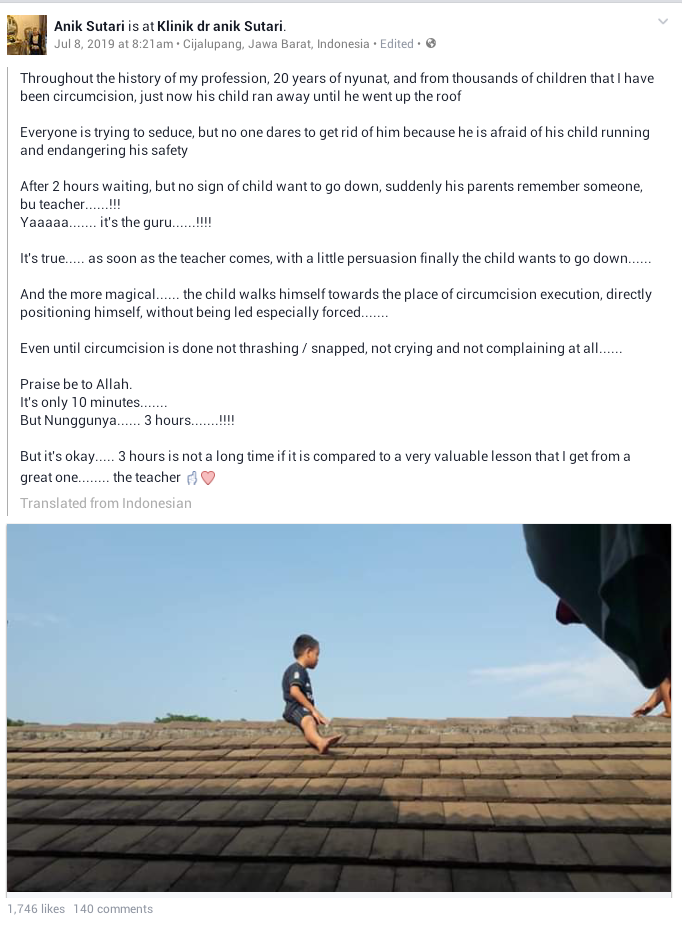